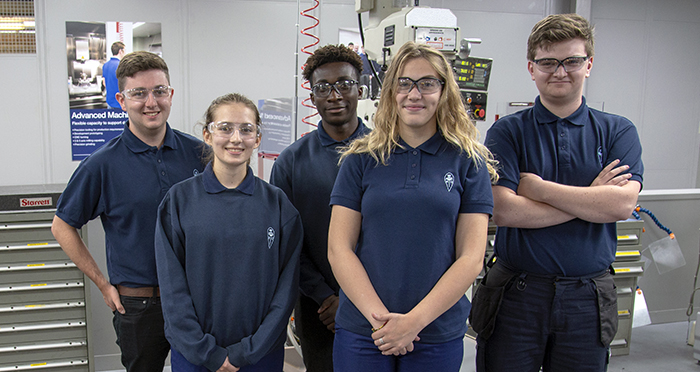 Reliance Precision Limited (‘Reliance’) would like to extend a warm welcome to this year’s engineering apprentices. Just a few months into their four-year apprenticeship training programme, the young engineers are already hard at work developing their mechanical engineering skills in Reliance’s accredited training facility.

The quality of applicants this year was as high as ever, with over sixty applications being received by Reliance for the rigorous three-stage recruitment process. Five applicants successfully completed the various practical tasks, tests and interviews for selection into this year’s programme:

Eighteen-year-old Maria has recently achieved A Levels in English Literature, Psychology and Product Design. As a member of the Air Cadets, Maria has exposure to STEM and its practical engineering tasks. Having had a long-standing interest in engineering, she was looking for an apprenticeship opportunity. After coming across Reliance’s apprenticeship webpage via Twitter, she visited the company for a tour and decided to apply. Maria explains “It was apparent from both my visit and the application process that Reliance is a company that looks at you as an individual. I have found everyone to be very supportive and there is a real sense of teamwork here. I am really enjoying myself.

Daniel applied to Reliance whilst undertaking his GCSEs at school, knowing he wanted a career in engineering. He learnt about the Reliance Precision Apprenticeship Scheme from a friend who had undertaken a work experience placement through school. Although he applied to a number of different company apprenticeships, the Reliance scheme was the one Daniel really wanted. He says “I was absolutely delighted when I received the call to say I had been successful. This is life changing for me. I now have the opportunity to build a career in engineering where I can learn whilst working.”

Whilst undertaking A Levels, Rory was trying to decide between a career in engineering or becoming a paramedic. Having done a one-week school work placement at Reliance eighteen months previously, he was already aware of the company and its high precision engineering specialism. He subsequently attended a local careers evening where he spoke with the Reliance team, and decided he wanted to become one of their apprentices. Rory comments “I really enjoyed the application process and the different stages. It was not just conventional interviews. It entailed tests that were both fun and challenging.” He continues “I was absolutely thrilled when I found out I had been successful. After undertaking a two-week rotation of all the different manufacturing departments, we have already completed some non-assessed projects and we have also manufactured components for an assessed project.”

Courtney’s interest in engineering came from two sources: her Grandad, who had worked in engineering all his life, and an inspirational talk she received from a lady during her school assembly as part of her school’s drive to promote women in engineering. After researching apprenticeship opportunities in her local area, she came across Reliance. She was completely fascinated with the intricacy and high-level precision of the instrumentation they manufactured, so decided to apply. Courtney comments “It has been amazing so far. I have learnt so much and it has been so hands-on. I have even managed to get involved in doing some coding. It is something I have only just started to learn at college, but Reliance have already let me put it into practice here.” She continues “I was so happy to be accepted on to the apprenticeship programme. I really like it here. They challenge you but they support you, and the people are so friendly. There is a great sense of teamwork.”

Dan has wanted to be an engineer since he was a child, which he puts down to an inquisitive mind that needs to know how things work. Whilst desiring to understand the science, he also likes the practical side, so an engineering apprenticeship seemed like the ideal solution. He explains “The application process was tough, but I think that showed Reliance were serious about finding the right people. Personally, I found it a rewarding experience. Realising I meet the high standards the company sets has really helped my self-confidence.” Whilst the other four apprentices attend Kirklees College as part of their training, to study the Level 2 Diploma in Advanced Manufacturing Engineering, Dan’s educational learning is taking a slightly different path. Having already achieved A Levels in Maths, Physics, Computer Science and Engineering, Dan is undertaking his Foundation Degree in Mechanical Engineering at Sheffield Hallam University. He adds “I am loving it here at Reliance. The culture and values of the family business mean everyone is so approachable.”

Robert Farrell, Reliance’s Training School Team Leader, comments “The 2019 intake have made an encouraging start to their careers and are already making great progress on the manual lathes and milling machines. I look forward to watching them develop their skills and expertise over the coming years.” He continues “As Reliance approaches its centenary year, we continue to invest in our engineering apprenticeship scheme, recognising the crucial role it plays in helping provide us with the highly skilled engineers of our future.”

Applications are now open for the 2020 intake of the Reliance Precision Apprenticeship Scheme. For further details please see https://www.reliance.co.uk/apprenticeship-scheme/